Why India's Unemployment Rate is rising? 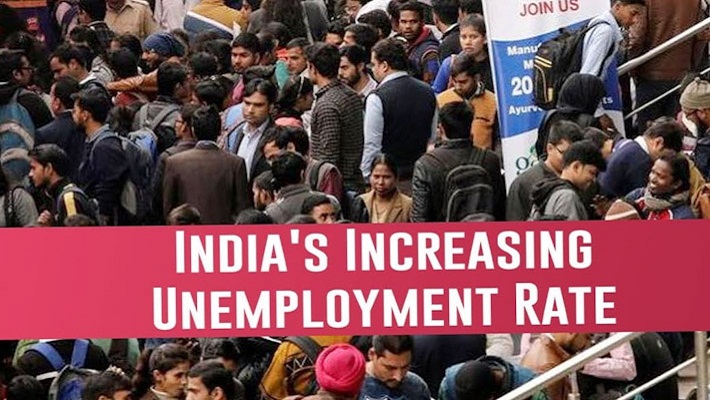 There's an increasing demand for a competent person as the job market continues to alter and evolve. India being a developing economy and amongst the world’s largest countries, with an yearly average population growth of 1 percent, the major sectors in India embody agriculture, information technology, manufacturing industries, transport, sports and entertainment, and Government services.

Yet there are screams of unemployment where the country’s sub-standard education is trapped with blames. While a massive number of scholars graduating every year, there are students with least interest in learning. They free-handedly collect their degrees which hold the major power of presenting them with employment. With terms of ‘Roger that’ to the stats that thousands of engineering graduates successfully completing their course, where solely a few of them are trained within the skills that employers search for with an eagle’s eye. At times, it becomes difficult for the professors and teachers to find what’s hidden in a student’s mind or its learning. Over 80 % of the students get employable skills for any job within the data! In a blunt report published by Economic Times    only 10% of the B- School graduates can be hired whereas India produces about three lakhs management graduates annually, but hardly 35,000 of them are employable.

Of all aspects of social misery nothing is so heartbreaking as unemployment.

Lack of vocational skills or low educational levels of the working population is one of the major reasons for rising unemployment. Primarily education is the base where an individual builds themselves with the potential they have making them eligible for employment. Vocational skill training provides one to tune his core work skills, industry based knowledge and professional competencies, which makes it possible to move from the education into the world of work. Despite the fact that Indian economy is growing in a fast phase, the growth has not been uniform which shows us that Low employment and education level, high dropout cases and lack of guidance and support in vocational training, can be the important reason for unemployment. Growing population is also directly linked with economic dynamics particularly poverty and unemployment. The rise in population is accompanied by the rise in the labor force of the community which can lead the considerable population to unemployment.

We have also witnessed the rise of automation and AI sector which can reduce the work based employment. A.I. manifest to be very effective in handling even more complex task as processing of multiple signals, data streams, and accumulated knowledge in real-time. Eventually, we will witness certain roles and jobs becoming less relevant. In most of the cases AI will have a supportive role to humans, empowering the human factor to perform better in handling complicated tasks in limited period and in critical situations that require wisdom and creative thinking. Simultaneously, there would be end number of new roles and specialties with a focus on technology and science.

To Have And Hold: Relationships And Marriage Psychology

Some Tips to Keep In Mind While Budgeting Your Overseas Education