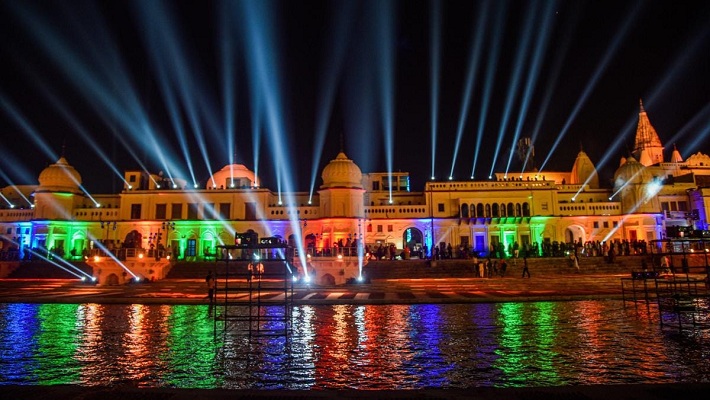 Most of the festivals are celebrated by reliving the moment that defines them. Diwali is for instance the reminiscing of the return of Lord Ram from Lanka to Ayodhya after his victory over Raavan. This year’s Diwali was special for religious Hindus in the sense that the reminiscence could be better visualized after the reclamation of Ram Janmabhoomi in Ayodhya. For those who were trying to reclaim it for decades, it was a reparation that was long overdue. The Supreme Court’s order late last year cleared the way for building of the Ram temple and the construction has started after 500 years of struggle.

Since the verdict, people from both factions have expressed their opinion on the secular morality of the decision. Many have said that it will have a bearing on the secular fabric of the country. They have posited that it applies strain on the secular thread and makes its retention a challenge. While it is true that the secular trait of the republic must be retained at all costs, the question in the end takes shelter in the shadow of perception as to what can be termed as a threat to it. One must be wary of being selective and not seeing it from the prism of facts and history.

The onus of coming to a conclusive report on the dispute was given to Archaeological Survey of India (ASI) which did an excavation in 2003. There were 20 authors of the ASI report including 4 Muslims as per the demand of the Muslim side. The ASI submitted its report which corroborated the historic existence of a temple at the site. Notwithstanding all the conditions being met, the report’s finding was refuted by the Muslim side without substantiated counter.

After the factual validation, comes the need to look at it from historical prism. Considering the fact that thousands of temples were destroyed over a long period of Mughal rule, it is not preposterous to stake reclaim to the land that was the birthplace of Ram, let alone all the other temples that were demolished. An example would be the Kashi Vishwanath temple in Varanasi which was demolished and a mosque was built at its place. The temple was later rebuilt beside the mosque.

Many people call it the after effects of ‘ultra-Hinduism’, blaming the incumbent government of fuelling the growth of the ideology. Before we go into the details, it is important to clear the air that an act of getting someone to make amends for something wrong done in the past does not fall under the category of ultra-anything. There is a huge difference between vendetta and setting things straight. If one must name it, we can call it a revivalism which was necessary to wake up the conscience out of the slumber.

Secularism cannot be achieved by a hybrid approach. There are only two ways to ascertain acute secularism. It can either be effectuated by laying sheath on all the religious customs and traditions that interfere with the normal functioning of the republic in any way or through a pluralistic approach wherein every religion is given complete independence to seek what is rightfully theirs from the religious and historical standpoint as both are intertwined.

While it is reasonable to disallow trivial endeavors driven by religious propaganda, an effort at making a resurrection which holds profound importance for someone’s faith must be respected.

This Diwali Witness A Virtual Celebration

Top Tips to Crack your GATE Exam in First Attempt!