Navratri brings the joy of festive enchanting the occasion of positivity into every region while each state starts to celebrate the days of its special traditions.

Navratri has the last five involved in certain rituals and practices. Navratri begins with Mahalaya, on which Hindus perform Tarpana through offers of water and food to their ancestors.

The legend of Navratri is related to the war between a powerful demon Mahishasura and Goddess Durga, where Lord Vishnu decided to create a woman for defeating Mahishasura according to Lord Brahma’s Boon. While Mahishasura attacked Trilok – Earth, Heaven, and Hell, a woman only could defeat the demon.

The Navratri festival goes way ahead with the inclusion of goddesses such as Saraswati and Lakshmi, Ganesha, Kartikeya, Shiva and Parvati. One of the most famous occasions in the pan-Hindu tradition, Navratri is the adoration of Saraswati – the deity of knowledge, learning, and music, Ayudha Puja.

Navratri helps in celebrating India’s festive observing a strict vegetarian diet and restraining from consuming alcohol and certain spices. On the eight or the ninth day, popular ritual Kanya Puja is observed in which nine young girls get dressed as the nine goddesses, starting from the foot washing, they are offered food and clothing while being worshipped as gods.

While waiting for Maa Durga to arrive, here is a list of 9 ways one can enjoy the holy festive. 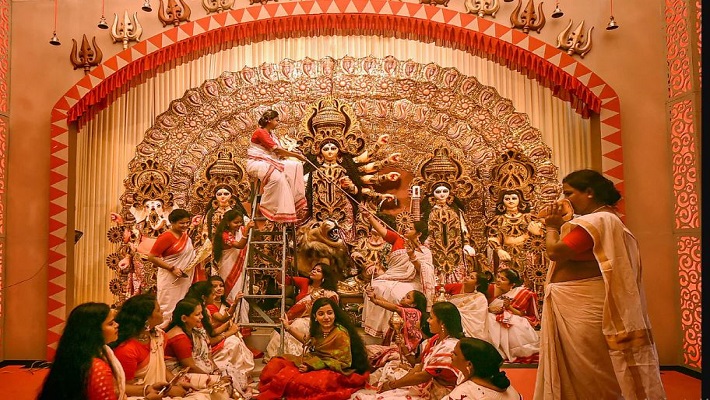 Kolkata, located in the eastern part of India, in the state of West Bengal, celebrates Navratri mainly as ‘Durga Pujo’ in the days of Saptami, Ashtami, Navami, and Dashami, which are the last four days of Navratri.

As the most popular festival in Kolkata, the days are observed with the sounds of the holy instrument ‘Dhak’ and the chanting of Durga slokas.

People enjoy the days at local pandals while hopping at night observing the artistry of a plethora of things such as light, color, clothes, and mostly design. Glorifying the beauty of the worshipable days, the ‘City of Joy’ offers prasadam which consists of bhogs.

The celebrations witness victory over the evil buffalo demon Mahishasura. The experience will surely help the memories revive years later. 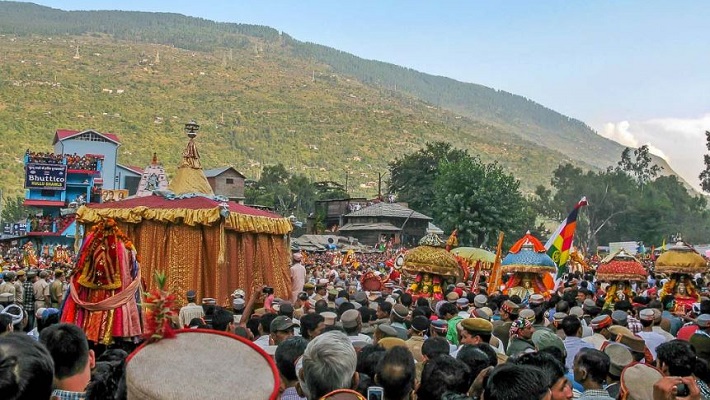 Navaratri is celebrated in Kullu of Himachal Pradesh as it takes place on the tenth day of Navratri. When the celebrations are ending all over the country, Himachal Pradesh gears up the day for celebrating ‘Kullu Dussehra’, marking the return of Lord Rama to Ayodhya.

The day is marked by the most famous festival of Kullu Valley where the valley is decorated with different bright hues and related decorations adorned on the streets. There is a huge procession of gods and goddesses on the main ground for the festival.

People from different parts of the country participate in different dance forms, musicals, and other cultural showcases and get a platform for familiarizing themselves with the local culture.

The festival is concluded with a very famous performance of Lankadahan by the side of the Beas River, which gives an experience that would stick in the mind of the participants for a lifetime.

The Himachal Pradesh State Government even accords the status of ‘International Festival’ to Kullu Dussehra which attracts more than 4-5 lakhs of people from nooks and hooks of the country.

Kullu Dussehra is one of the events that no one wants to miss on the Navratri trip. 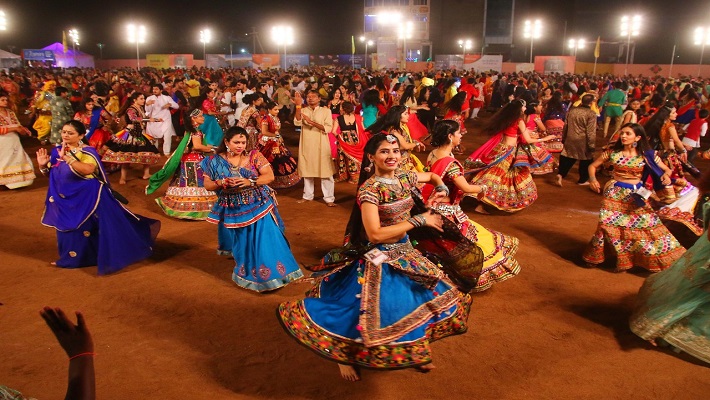 Kota in Rajasthan celebrates Navratri by the famous ‘Dussehra Mela’, where on this day an effigy of Ravana of 72 feet along with Kumbhakarana and Meghnad are destroyed to mark the win of good over evil.

It is one of the tallest effigies in India and later on a fair of 20 days a large ground of Kota is witnessed till DhanTeras. After the mela, the city comes to life and the entire region talks about beautiful and traditional garments, children celebrate with dance & music, and art, and people pray to Goddess Durga to sweep away the infectious energy from all over the city. 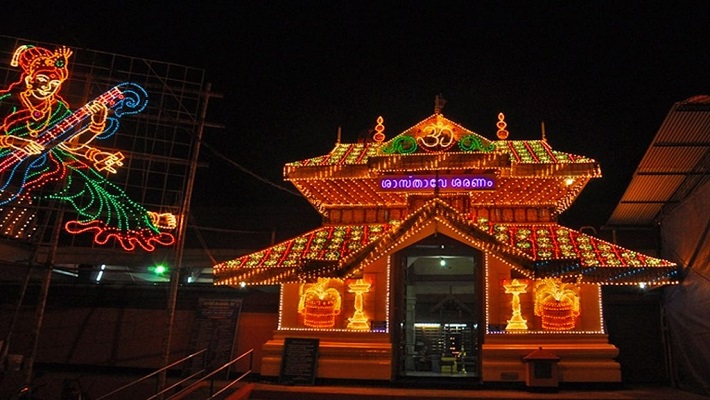 Kerala has its own finest way of celebrating and witnessing the auspicious day of Vijayadasami, which is a spiritual day in one hundred and eight Durga temples of Kerela. People visit the temples in Kerala and prefer to teach their own educational values, and offerings, and worship domestic animals, and vehicles in their celebrations.

Goddess Saraswati is worshipped on this day and students keep their books in front of the holy idol for two long days along offering sugarcane, jaggery, and much more.

A special puja is offered on the tenth day of the celebration after Keralites worship the musical instruments.

The celebration is mixed with Kerala’s own local culture and traditions where a taste of the equivalence is witnessed by passing tourists. The tourists get a soulful experience. 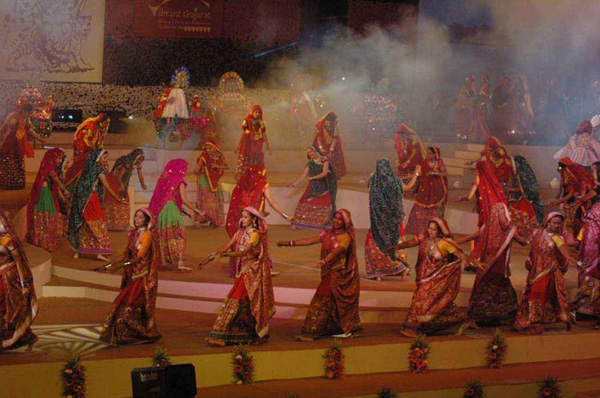 Navratri is a day that is much awaited by the people of Gujarat. The first nine days of the Ashwin month are celebrated with devotees fasting for nine days and devoting themselves to the worship of Maa Shakti.

In the evenings, the ‘Garbi’ is lighted while women perform aarti with it. Days and nights are admired by the performance of aarti around the idols of Goddess Shakti, while devotees pray to Goddess Durga and the famous folk dance of Garba is performed.

Tourists talk about the ‘Kedias’ and ‘Lehenga-Cholis’ which are prepared for a dream-like experience. 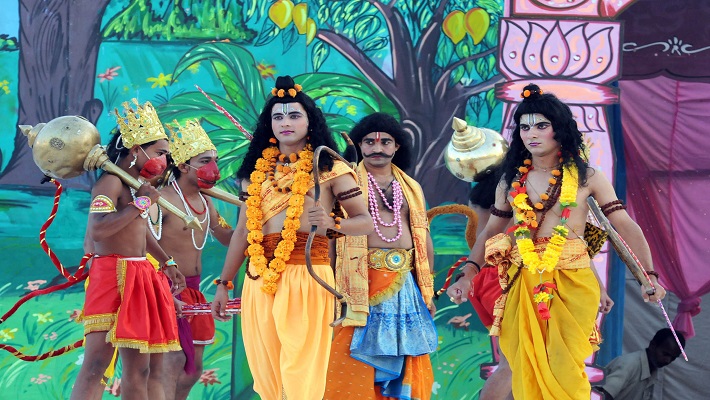 In the states of Uttar Pradesh and Bihar, Navratri is celebrated with ‘Ramleela’ which is a dramatic enactment of the life of lord Rama from the Hindu epic Ramayana. Ramleela is performed in theatres, temples, and temporary stages. After the nine days, an effigy of Ram’s enemy, the demon Ravana and his brothers Kumbhakarna and Meghanada are burnt symbolizing the end of all evil.

The entire ceremony is an exclusive podium of fireworks. 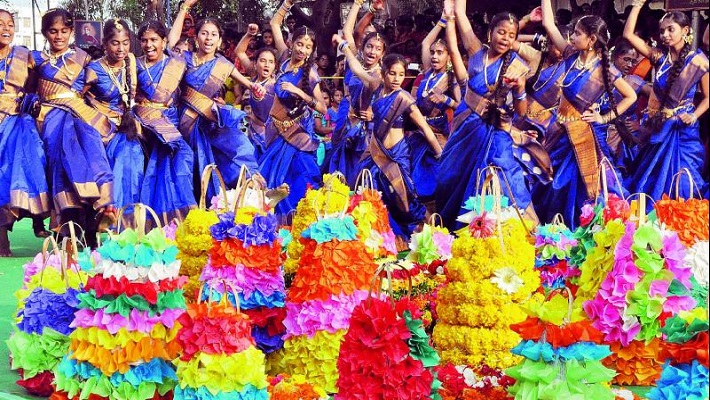 The state of Andhra Pradesh during the Navratri festival invokes Mother Gauri, the good-natured goddess. The unmarried girls join the communal worship seeking a spouse of their choice. The festival is called ‘Bathukamma Panduga’ in the Telugu language, meaning Mother Goddess, Come Alive!

The final day of the festival is marked by the immersion of idols in a lake or a river. 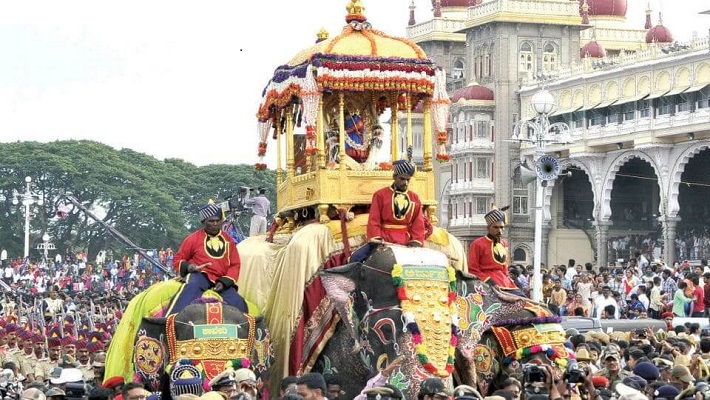 A royal sword is set on a throne for worshipping on the ninth day of the festival and it is taken on a procession of elephants and horses.

Mysore Dussehra is the ‘Nadahabba’ or the state festival of Karnataka which is celebrated through utmost spectacle and joy in the city of Mysore. It is followed by the same rituals that were first practices by King Raja Wodeyar I in 1610.

On Maha Navami, which is the tenth day of the procession, which is Dashami, a grand procession of dancers and musicians escorts an image of goddess Chamundeshwari – A form of Goddess Durga mounted on a golden saddle on the top of an elephant and is carried through the city. 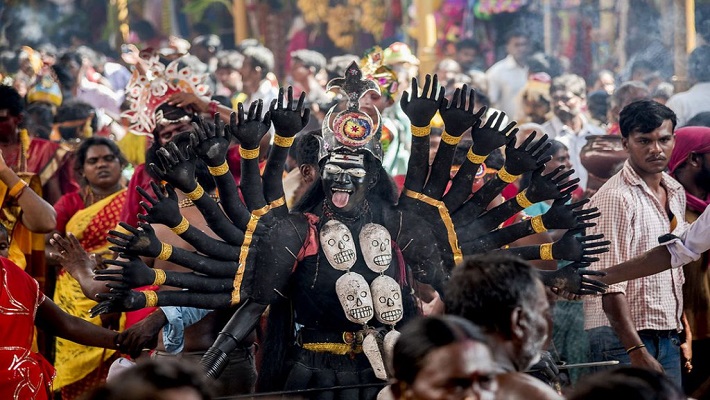 An interesting part of Tamil Nadu’s celebration consists of the decoration of the Kolu, which is a 9-step staircase.

It is stated that each of the steps represents each day of the festival. The stairs are adorned with miniature idols of gods and goddesses, acquired by the devotees as heirlooms from respective forefathers.