Ragnarok is Here!: See what Kratos & Atreus face as Ragnarok Looms into the Nine Realms

Sony's state of play event was en-thralling. We've already seen some major revelations in 2021, but fans were hoping for a major gameplay reveal or an update on upcoming big titles. And, without a doubt, if I'm talking about major revelations, God of War: Ragnarok is the most anticipated sequel fans are looking forward to right now. Yess Finally, God of War Ragnarok is on the way, and during the state of play event, we saw some major character revelations that fans were not expecting to see so soon in the trailer. The official trailer has already shown us so much that fans are now debating what else the game could reveal.

God of War 2018 was a huge success due to its incredible storyline and unexpected twists while remaining true to its Norse roots origin.

The upcoming reunion with Kratos and Atreus appears to be another spectacular, action-packed adventure that delves into father-son bonds, fate ties, and more. We saw the pair take to the battlefield in this new story trailer, which debuted on Tuesday at the State of Play showcase, and we got to see the growing tension between father and son as they try to protect each other and go up against a slew of foes large and small in the realms. We already know that the story is infused with Norse Mythology, which lends the stories a more realistic and authentic feel.

This complete breakdown is based on my thoughts on what God of War fans can expect from its upcoming sequel.

Everyone Keeps Secrets, Sometimes it’s the only way to protect the ones we Love-: Atreus

Atreus, whose giant genes began to emerge as we progressed through the 2018 God Of War?

Yes, the trailer shows that the child has matured and can use his divine genes to their full potential while serving as his father's sidekick. The tense connection between Kratos & Atreus was a major plot aspect in God of war 2018. 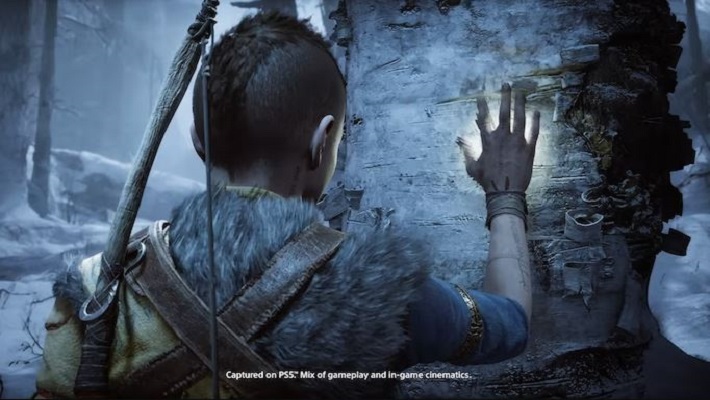 At the beginning of the trailer, we see Atreus touching a tree, which appears to react to his touch which gives off a pulsing light.

This image shown above is none other than 'Yggdrasill', the World Tree.

According to my theory, the tree that Atreus was keeping his hands on as shown in the trailer is  no doubt 'Yggdrasill' (The World Tree) where Odin once imprisoned Mimir's head . 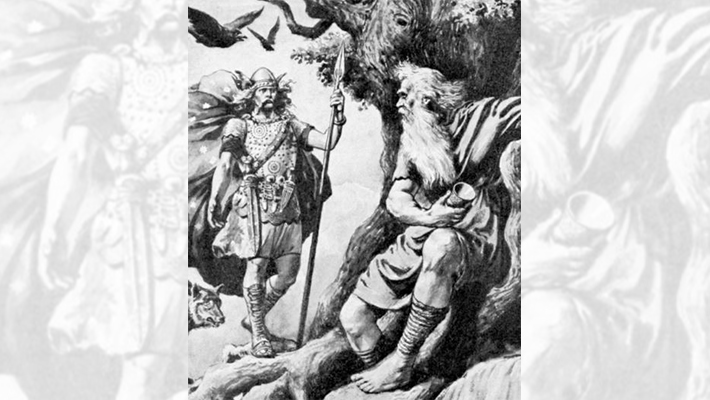 Odin famously sacrificed an eye to Mimir in exchange for a drink from Mimir's well in Norse mythology. During the Aesir-Vanir War, Mimir was killed and beheaded by the Vanir. Odin then embalmed the severed head with special herbs and chanted magical songs over it to preserve it after seeing it.

This could be the result of anything related to Atreus which, hopefully, we’ll be able to explore. What the tree has to do with Atreus and his abilities are yet to be known.

I know you, God-Killer, what is it you want from me? Is it a God of war you came to find?-: Tyr 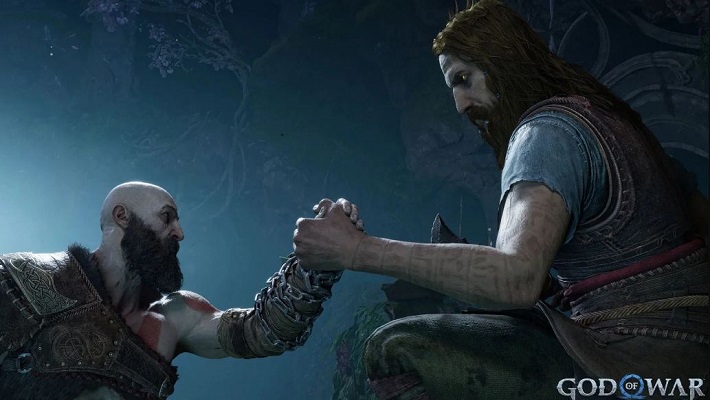 And as the trailer progressed, we saw exclusive footage of the Aesir God "Tyr" with Kratos releasing him from the chains, and we heard his voice for the first time in the trailer. In the Norse Myths, Odin grew to regard Tyr as a threat to his power, correctly suspecting him of conspiring with the giants.

As a result, Odin imprisoned Tyr and spread rumours about his death. And that was the reason we saw some easter eggs related to him & we already guessed he is alive imprisoned somewhere.

In the 2018 game, we saw some of the  the  easter eggs related to him in Midgard, explored Tyr's vault, and even saw his statue. In the Norse lands, he is well known as the god of war, and, like Kratos, he has a kind of special relationship with the gods of different mythologies.

Out-of-Body Experiences & The Dream of Odin Finally, we saw a mysterious figure talking in the shadows, saying, "You don't really want war, Kratos?" All that blood in your hands and the hands of your son. 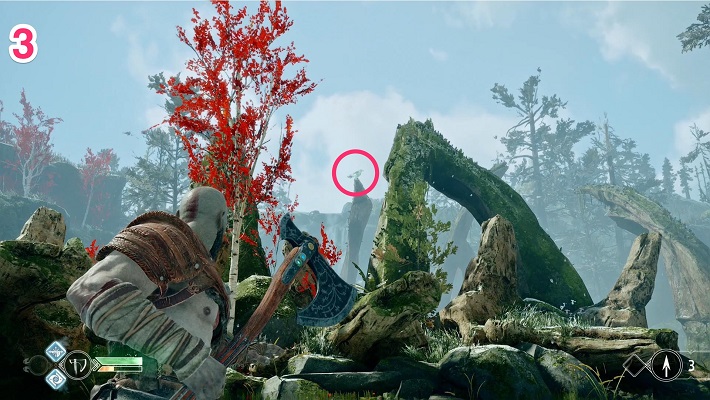 We are certain that odin’s ravens followed Kratos and Atreus throughout their entire journey.

Was Odin keeping an eye over Kratos the entire time? 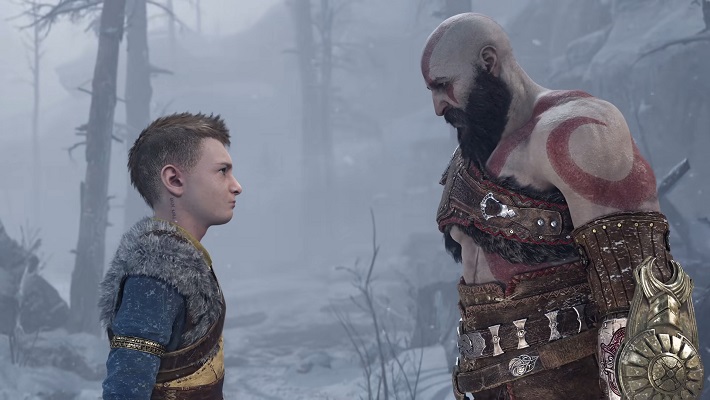 The action then shifts to Atreus, where Kratos asks about his son's dreams, saying, "We are following your dreams."

Is there anything you're not telling me?

In response, Atreus says, "You must trust me," and the scene ends there.

So, what was Atreus up to? 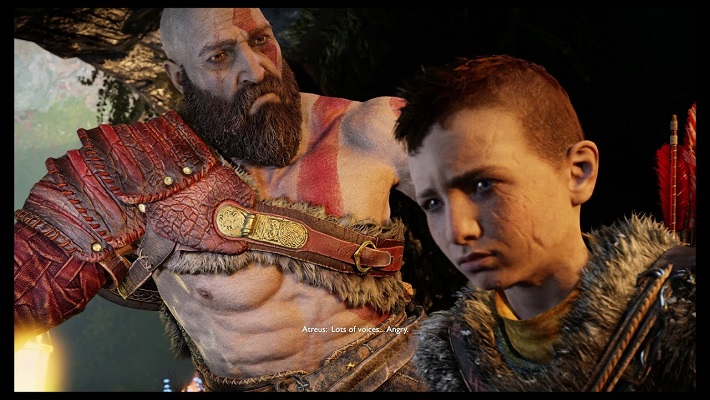 In the prequel, we saw Atreus being disturbed by hearing voices, which is undoubtedly one of the more disturbing aspects of his hidden repertoire.

In 2018 God of War, At the end we knew that everything was already written

Was it Faye's intention?

Was she aware of this the entire time?

Perhaps this is why Atreus kept dreaming about his mother, which led Kratos and his son to the top of the mountain to lay her ashes to rest in Jotunheim.

While returning, we realised that their entire journey together had already been written, and at the end, we saw Atreus  will turn out to be the trickster “Loki”.

Death Can have me when it Earns me -: Kratos During this Fighting scene we saw kratos and his son fighting the valkaryies. Im pretty sure odin have ordered them to kill the father and son to stop them  from creating the events of ragnarok. We saw a glimpse of Hellheim as well. Previously we saw kratos killing the keeper of the bridge of the Damned in Hellheim.

What do you think?

Why it was required to visit the hellheim again?

Is it to kill Hel? The goddesses of Death? 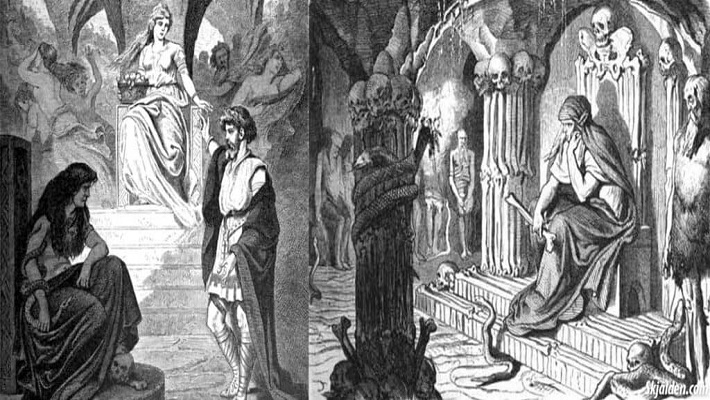 Has the ALL-Father Odin given her the order to kill the god-killer?

Can we Fans expect a boss fight here?

The mystery will be revealed on November 9th, 2022. There is a pair of inseparable wolves in Nordic mythology whose sole purpose was to relentlessly hunt the sun and the moon in order to devour them. 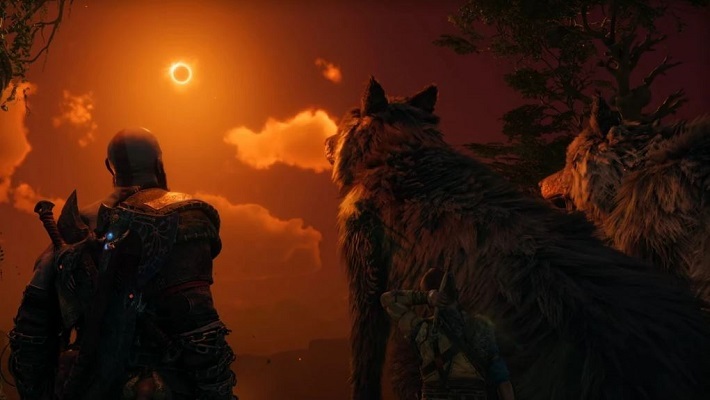 We saw this beautiful scene where Atreus shots his bow towards the sky and skoll chases the sun to devour it. In the image above, we can see the sharpshooter shooting an eclipse sun and moon, plunging the world around him into a nightscape. This is the action we see them taking in the trailer. While this heavily suggests the identity of these two wolves, they could also be based loosely on mythology and could be the offspring’s of Fenrir. 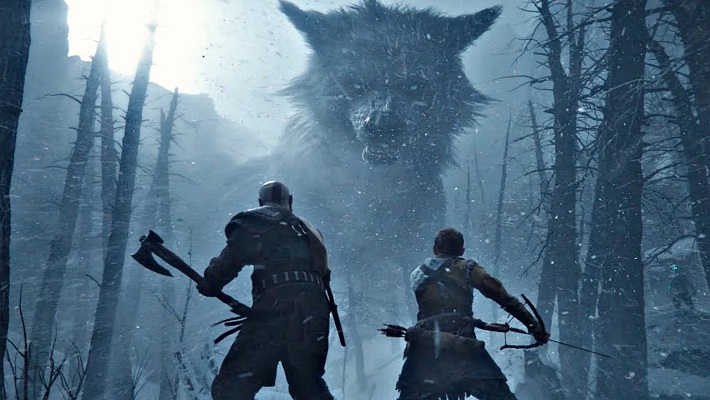 In the 2nd  Teaser we also saw glimpse of Loki’s son, the giant-wolf Fenrir.

Is he a Friend or Foe? Yet to be known.

Man With a Purple Blade 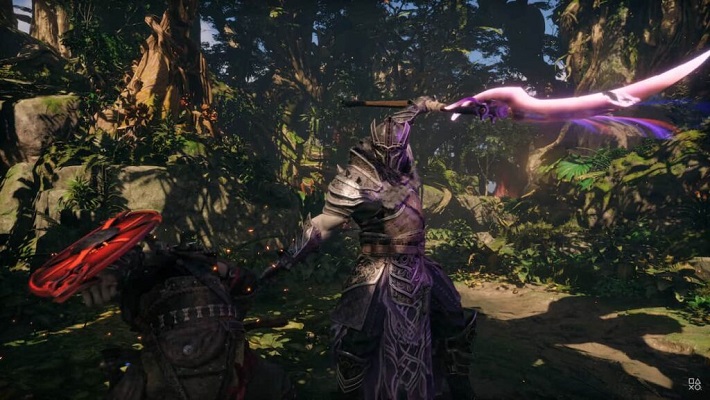 The trailer reveals some major new characters where we can see 2 major new character. And it seems like the game will explore the under-water world as well. But the mystery remains if they are friend or foe. For example we saw a  a mermaid imprisoned in some sort of underwater cage and the purple man with the blade attacking  kratos . The scene shifts here and we can clearly see the dark elves fighting besides kratos helping him to evade the on-going destruction.

Why are they saving him? When he killed many of them as well as killed their grandmaster in the boss fight?

Freya Returns, But wait is it the Witch’s Den? Fate only Binds you if you let it. Do what is necessary, not because it is written.

Freya return is no surprise to anyone… After a long battle, Kratos spares Baldur’s life, but chokes him to death after Baldur attempts to murder Freya for inflicting him with the invulnerability that robbed him of any sense of feeling for so long.

Freya curses Kratos for all eternity at the end of this. And in this official trailer we saw odin questioning kratos about his godhood while we can see the god killer killing someone brutally with his fists.

Was that freya? Who got killed?

The God Of Thunder Vs The Ghost Of Sparta: The Godly Showdown The Final Epic showdown that we fans were waiting for is to get a glimpse of-: We've already heard tales about Thor, such as how mighty and ruthless he is; in the prequel, we saw Mimir discussing events on such as how Thor killed the entire giant family, which was ordered by the all-father of Odin himself.

once, the giants challenged the god of thunder, and he was given three challenges.

The first task was to empty a massive drinking horn, which the king claimed his people could do in two gulps.

Thor took three gulps, hoping to lower the level of the drinking horn just slightly before having to stop.

After Thor demanded it, the next challenge was to wrestle one of the giants. The king gave him an old woman to wrestle with, but no matter how hard he tried, Thor could not bring her to the ground, and she eventually forced him to kneel.

Thor's final challenge was to pick up the king's cat, which was as tall as Thor.

While Thor tried his hardest, the cat simply shifted, making it impossible for Thor to lift more than one paw off the ground.

The three were defeated, but when they were led to the gates, the king revealed the plot.

We have already heard the tales about thor and according to mimir he is the  strongest of all the odin son’s. This fight is going to be utterly insane we already saw the kratos leviathan axe &  thor’s mjolnir clash into each other.

So the game is yet to come, and I can't wait to get my hands on it.

Santa Monica Studios is well known for their god of war games, which never stops to amaze us. Fans are still playing to find hidden elements in the game, and discussions about the sequel have already begun. This action-packed adventure with a true-to-its-roots storyline will undoubtedly go down in gaming history as one of the best games ever made.

Fans Get Ready! The fimbull Winter is around the corner...!

Things To Keep in Mind Before Adopting a Pet